< Back to All Press

Get ‘Em While They’re Fresh! 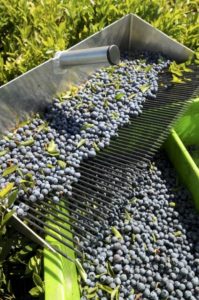 Bangor, Maine – July 8, 2015 — The Wild Blueberry season is nearly upon us. In just a few short weeks starting in late July and running fast through early September, approximately 250-300 million pounds of Wild Blueberries will be raked and mechanically harvested from the rocky barrens and fields that stretch from Maine to eastern Canada and Quebec. Wild Blueberries are indigenous to this region of the world; they are over 10,000 years old; and while the annual harvest has been taking place for generations, global demand for this antioxidant rich superstar has put Wild Blueberries on the Superfoods map. Savvy consumers know that these delicious little berries are available year round in the frozen section of supermarkets across America. But once a year – from late July and though early September – this amazing fruit can be enjoyed fresh. You just have to be lucky enough to be close to where Wild Blueberries are harvested.

“Our culture has grown accustomed to eating fresh foods anytime of the year, like watermelon in January,” explains Lynn Thurston, owner of Blue Sky Produce in Phillips, Maine. “The fact that our fresh Wild Blueberries are available just a few weeks of the year makes them really, truly special.”

Thurston, who is a distributor of fresh foods, says the phenomenon is akin to ice cream stands, which are open only for a few precious months of summer. “Of course, like ice cream, Wild Blueberries are available year round in the freezer section. But once a year, and only once a year, they can and should be enjoyed fresh,” she says.

Before the rise of farmer’s markets, it was difficult to get significant quantities of fresh Wild Blueberries into the hands of consumers. The effort it takes for growers to manage these fresh Wild Blueberries is highly demanding. The job includes hours of fieldwork, hand raking, winnowing (separating the berries from the twigs and leafs), and preparing for market.

However, today, with a strong farm-to-table movement and a higher consciousness around local foods, the fresh Wild Blueberry market has grown and earned itself a place at the table. Now it is enjoyed as part of a sequence of delicious seasonal foods that begins in the spring with asparagus and greens, moves through cucumbers and tomatoes, and culminates in the fall with apples, parsnips, and winter squash.

The annual Wild Blueberry harvest has increased over the last several decades. Of the 250-300 million pounds harvested annually from Maine to Eastern Canada and Quebec, 99 percent is frozen within 24 hours of harvest, when flavor and antioxidant power are at their peak; 1 percent (or 2.5-3 million pounds) is sold fresh. The Wild Blueberry harvest also provides a financial windfall to an otherwise economically challenged part of the country. According to a 2009 study conducted by Planning Decisions, Inc., the economic impact of the Wild Blueberry harvest in Maine alone has provided $173 million in direct sales, 2,500 jobs, $63 million in annual payroll, and potential for a $400-$500 million annual impact over the next decade.