Have you ever looked down at the food you’re eating and thought, “Where did you come from?”

It’s no space age phenomenon – it can happen right here in 1873…er, 2011. You can get the feeling a spaceship arrived in your kitchen and took over what you thought was a decent, healthy meal.  Sometimes even the good guys – that is, the healthy, disease-preventing foods that provide antioxidants, vitamins and nutrients – can’t battle the forces that have brought your dinner plate to its knees.

That’s when you know you’ve entered a culinary battle royal coming to a kitchen near you: Cowboys and Aliens. 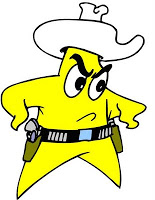 Whether you consider your eats as urban as Sissy’s line-dancing Bud, or as free as a galloping horse carrying Alan Ladd, your culinary cowboys will always be characterized as foods that roamed the West when America was young. The cowboy foods are the good guys. They are the mainstays of your health: the foods that crusade against disease, fight cancer, maintain a healthy heart, and prevent obesity-related illness. They slap the dust off their boots and get to the work of dusting free radical from your cells.

Feeling like it’s your first rodeo? Here are some examples of culinary cowboys that will tip their Stetson to your well-being and longevity.

Caveman food. They pre-date cowboys by a smidge, but eating like a caveman isn’t that different from eating like a cowboy. Follow suit, and you’ve got a start on battling gastronomical evil forces. According to Superfood originator Steven Pratt, our genetic makeup remains the same as our cave dwelling (or ranch-roaming) ancestors’, but our lifestyle does not. The more modern our lifestyle and food choices, the more we need foods that cavemen used to get their nutrition in order to counteract our choices. That means eating berries, nuts, and foods that grow on trees and from the ground.

Food without labels. Food that requires no packaging and no ingredient label should serve as the basis of our cowboy diet. These cowboy-friendly foods – usually found at the perimeter of the supermarket or at farmer’s markets – are sold just as nature intended them to be, and they are the foods that do the most to keep us healthy as we traverse the frontier.

Local food. They may roam far and wide on their trusted steed in movies, but real cowboys were too busy handling things at home to stray far from the pasture. They ate food made and grown locally that was native to their surroundings. Taking advantage of local food means eating what local farmers grow. And, cooking with indigenous ingredients is often indicative of someone eating real, whole, healthy food. Not to mention, when you are eating locally, your dollars are kept close to home, and that means your helping your own, Pilgrim.

Clear origins. Cowboys brand their cattle so if they stray, there’s no question where they came from. Can you trace the origin of what you’re eating? What does that origin look like? Is it a farm or a factory? Is it a kitchen or a plant? Is it made by many hands or none?  Could you tour the facility that made it? Is it far away or close to home? Tracing the origins of what’s on your plate can be a great way to discover the real roots or the wicked source of the food you’re colluding with.

Eating with the Posse. Eating together is the cowboy way. What does that have to do with your plate? A lot, actually. Research shows that making and eating family meals is a key element in eating well and staying healthy. Cowboys also eat as much as they are hungry for, and they eat mindfully – they don’t scarf a bag of chips while they on a perilous journey into the sun.  They slow down and enjoy the victuals.

No food is bad. But some are just not of this world. Now that you know the cowboys, the aliens are easier to identify. Sometimes these advanced organisms are straight out of a Spielberg film, sporting one eye and two antennas, but sometimes they walk stealthily among us, their true identity hidden by an earthling-like smile that charms our eyes and our stomachs.

Extraterrestrials. Food activist Michael Pollan cautions against foods your “grandmother wouldn’t recognize as food”.  That usual means, in true alien style, that it doesn’t come from the earth. If your food comes in a tube or a carton, is sprinkled with colored sugar or iridescent cheese powder, Rooster Cogburn might have sauntered right by it without even realizing it’s food – and so should we.

Alien names. Do the ingredients in your food seem, well, alien? Unpronounceable, multi-syllabic words on your ingredient list is a sign clearer than a crop circle that there is something unearthly in your lunch. It could be hurting your health, or at least taking up calories that could be spent on those that improve it. Instead, throw your lasso around foods that have four ingredients or less, and when you can, those that have just one.

Alien claims. Whether they are “light”, “enriched” or “heart healthy”, alien foods try hard to assimilate, but if they require a label, it means they are trying a little too hard. The best foods come in their own packages (with the exception of frozen, which require packaging –  the good ones have just one ingredient) and make claims from nutritionists and scientists, not marketers.

Ageless food. According to the Lempert Report, shoppers are making more trips to the supermarket and spending less money per trip. These “narrow missions” could be part of avoiding aliens – that is, food that keeps forever. If your food doesn’t go bad, there’s a reason (see above). Frozen fruits and veggies or unfrozen foods that decompose like a giant parasitic egg bent on attacking Sigourney Weaver are foods that are real, whole, natural, and healthy. Keeping fresh, vulnerable foods around might require more frequent trips to the store, but you’ll be free to buy what you want without worrying it won’t get eaten.

Sure, sometimes we’re all itching for a good fight (or have a soft spot for Harrison Ford riding a horse), but if you’re interested in doing the best thing you can do for your health and longevity, give the food aliens a boot back into orbit. Knowledge and a few good cooking tools will serve as your magic bracelet – that’s all you need to saddle up and get yourself some colorful, antioxidant, nutrient-rich fixins that aren’t from a galaxy far, far away.