One of the best ways to stay healthy and prevent disease is to eat from the rainbow. That means choosing foods that represent all the colors of the spectrum. Research continues to pile on the evidence to support the color concept. In fact, in tests conducted on rats fed different colored diets, rats fed a strictly white diet not only didn’t thrive, but they died—within three months.

The greatest number of healthful compounds can be found in the most colorful foods. Naturally bright hues prevent aging and disease and keeping our brains, our skin, and our hearts healthy. Available to our cavemen counterparts and on colorful, noticeable display to birds and animals, color sends a clear signal: nutrients can be found here. But what are we really taking in when we eat colorful foods?

Plants are colorful because of pigments, which fall into two categories: carotenoids and anthocyanins. Carotenoids are at the yellow-orange-red end of the spectrum. They are found in foods like carrots and tomatoes and are also in leafy greens (they’re just covered by the green of chlorophyll). Anthocyanins are at the red-blue end of the color spectrum. There are over 300 types of anthocyanins, and they are found in a lot of the foods we eat, but they are on brightest display in berries and deep blue and purple colored fruits and vegetables.

Pigments serve as a food’s own personal SPF. They block the UV light that they are exposed to every day, protecting themselves from the free radicals that are produced by the sun – a result of photosynthesis. Just as they protect the plant, so do they protect us as when we eat them.

Anthocyanin pigments give blueberries their intense blue color – a hue that is almost black, especially in high skin-to-pulp ratio wild blueberries. Blueberries can have as many as 25-30 different types of anthocyanins, and they have them in large concentrations. In studies, rats fed these colorful blueberries were shown to have better physical performance, better communication, fewer damaged proteins in the brain, and better cognitive function.

Recently, new Parkinson’s research has determined a connection between anthocyanin and Parkinson’s disease. Scientists found in preliminary research that the flavonoids in berries could be a key to prevention. While general flavonoids found across many different foods showed a positive link to prevention in men, anthocyanins found in blueberries protected both men and women from the disease, leading researchers to believe that anthocyanin-rich berries made the difference.

Anthocyanins have been found to prevent a key step in atherogenesis: oxidation of low-density lipoproteins, or LDLs. Red pigments seem to retard the bad cholesterol and reduce platelet clumping, which guards against clots.

Anthocyanins also act as powerful antioxidants, known to fight aging, cancer and heart disease.  They have been found to prevent oxidation which has implications for vascular disease, and they have also been found to relax blood vessels, reducing chances of heart attack.

According to cancer prevention research, anthocyanins can inhibit the growth of tumor cells by slowing the growth of pre-malignant cells, and encouraging cancer cells to die off faster. They are also found to have an effect on reducing the precursors that initiate cancerous tumors.

The journal Molecular Cancer found that a special anthocyanin found in the skins of deeply colored vegetables and berries known as Cyanidin-3-glucoside (C3G) can contribute to decreasing the health-damaging free radicals, and new studies have found that anthocyanins found in black raspberries may inhibit colon cancer cells. 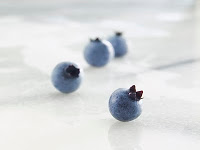 If you are looking to increase your anthocyanin intake, and you should be, look to berries: wild blueberries, black berries, black raspberries and chokeberries top the list. Other great sources include red grapes, blackcurrant, and eggplant.

A surprising source for anthocyanins is black rice rumored to increase in popularity 2011 (along with mobile TV and bolder beer) due to its Mediterranean diet cache combined with its high anthocyanin content. It’s just one more way to start embracing color by putting an anthocyanin-rich rainbow on your plate.