Front-of-Package: Why Are Our Foods Covered in Chaos? 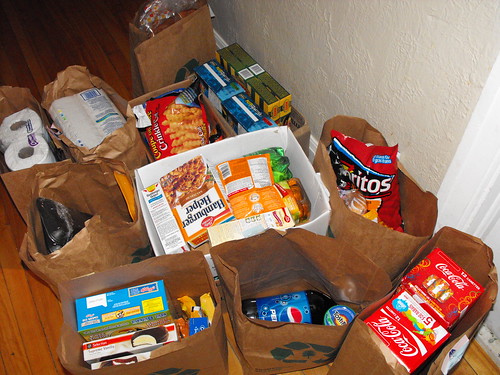 Imagine groceries with no front-of-package labeling. No health claims. No “Heart Healthy” badges, no “0g Trans Fat” banners, no “All Natural” swishes. No claims about fiber or sugar. How would the poor helpless consumer know what to buy?

If you insist you’d be just fine without the boisterous labels, don’t be so sure. In fact, consumers say they do use the information on food labels to help them make buying decisions, according to the International Food Information Council Foundation – at a rate of 68%.

In a recent blog post, New York Times writer Mark Bittman cites Marion Nestle’s call to fix a broken the food system. Topping Nestle’s list is fixing front-of-package labeling. Nestle wants first and foremost to put a halt to marketing food to kids. “Period. Just make it go away,” she said. She also urges a complete eradication of health claims unless they are backed up by universally accepted science – which, she says, would get rid of them all.

Sorting Out the Labels – With More Labels

Front-of-package labeling – claims that adorn food packages that are not limited to the back-of-package Nutritional Facts – include percentage claims (25% daily fiber!) functional claims (heart healthy!) and broad claims about healthiness (better for you!) and they are everywhere in the grocery store aisle. And despite a call by many public interest groups for fewer labels, those badges seem only to be growing. Some, at least on the surface, exist to help us make sense of the already mounting claims – more labels to make sense of the labels.

In a new video report, The Lempert Report breaks down some of this “sort it out” labeling. Some of these include:

The more labels there are to add to the madness, according the Lempert Report, the more it begs the question of which of the labels will survive in this quest to direct the consumer to the best foods. According to Nestle, there are few if any worth saving. Even labeling that attempts to do good are really just tools for selling, not for buying, she said. And concerns are deepest when they are most misleading.

According to the Huffington Post, The 9 Most Misleading Labels include claims of real fruit, low sugar, and confusing serving sizes, among others. As part of the worst offenders, the article highlights two troubling label issues that might surprise you: fiber and caffeine.

Such labeling chaos has led to some organizations to push for reform. A 2010 report published by the Center for Science for Public Interest calls for making labels to be easier to read and for putting a stop to terms like “natural”, “0 trans fats”, and functional heart claims such as “heart healthy”. Other public interest groups have been vocal when it comes to more labeling which would inform consumers about foods that are genetically modified. Advocates for better labeling on beef, including claims it is “grass fed” are also at work on misleading claims. According to Onlygrassfed.com, this tricky claim means only that an animal has some access to grass, not that it is grass fed.

Until the chaos stops, every claim is backed by solid science, and every potential danger made apparent, it is, as always, caveat emptor at the grocery store. If you are weary of food label chaos, here are three uncomplicated ways to eliminate health claim fatigue.

Stick to the facts. Understanding the Nutrition Facts key on the back of food packaging (not the front) is essential. You can learn more from the Mayo Clinic’s interactive guide to the Nutrition Facts label. It shows which nutrients to limit and which to get more of. You can also take a look at our Nutritional Facts primer from a past post.

Avoid the claims. Foods that don’t have packaging, such as fresh fruits and vegetables, make their own case for health. Stick to the perimeter of the store to shop foods that are closest to their natural form and provide good health without the confusing claims.

Buy foods with fewer ingredients. This ingredient list for frozen wild blueberries shows exactly what you are getting: the whole fruit, and just the fruit, with its fiber, nutrients, and antioxidant content intact, the way nature intended.

The FDA provides labeling information and the latest updates about label legislation at FDA.gov. You can also view an entertaining video created to help consumers get the facts about labels.