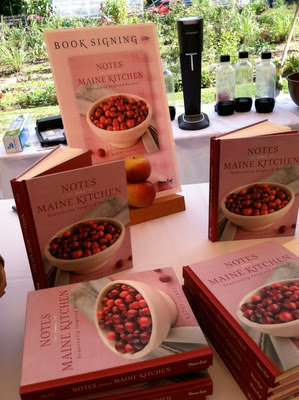 The delights of summer in Maine are obvious. But local author Kathy Gunst has a lock on what makes all seasons in our state delightfully delicious. Gunst is a writer, food aficionado, and TV and radio personality who writes Notes from a Maine Kitchen, a blog that does double duty as a resource for a wealth of recipes inspired by living in Maine year round. Her recently published book of the same name, Notes from a Maine Kitchen (Down East Books, 2011), takes on the seasonal bounties of Maine, from January right through to December. The focus is on regionally-inspired food made from locally-sourced ingredients. While March ushers in Maple Cheesecake with Maple-Ginger Crust, July is the perfect month for Grilled Swordfish with Olive-Lemon Scallion Topping. What a year!

Is eating seasonally in a region where summer is central even possible? You bet, says Gunst. “I try to follow the seasons all year, even here in cold Maine. With winter farmer’s markets and a large vegetable garden it’s become easier than ever,” she told Wild About Health. “There is no better eating than following the seasons and eating locally.” She says she even tends to naturally eat less fat when she eats seasonally. “Food picked in season is bursting with flavor. I’m never craving ‘something more,’” she says.

More than just recipes, Gunst characterizes Notes from a Maine Kitchen as a literary cookbook. It includes a selection of essays, notably one about a smelt fishing expedition on the Cathance River with Portland Chef Sam Hayward (yes, the Cornmeal-Coated Maine Smelts recipe is included). She also addresses the rise of the winter farmer’s market and offers up already-assembled menus for any occasion, including a Hot Summer Night (cooled by soda with Wild Maine Blueberry Syrup) and an Autumn Apple Brunch (featuring Grilled Gruyere with Maple-Caramelized Apples – you can find the recipe on her recent blog post).

Gunst’s food philosophy is one based on simple food that results in fresh, wonderful flavor – garden-picked greens, organically-raised chicken, local lobster, fresh-picked berry cobbler – simple dishes that let the ingredients shine. Chapters of the calendrical book focus on quintessential foodie activities in Maine, such as foraging for wild mushrooms, canning, planting, and uncovering treasures from farmers markets.  Her Wild Maine Blueberry Syrup recipe, which she was kind enough to share below, is a perfect example of her food philosophy. Great for sweetening many dishes, it’s ideal for capturing the season’s wild blue essence for use any time that a entrée, drink, or dessert needs a colorful, tasty zing.

This crisp season you’ll find Gunst all around Maine and beyond sharing her recipes and signing her book. She’ll be teaching recipes at the The Institute of Culinary Education (ICE) in New York City on Saturday, October 15, and doing demos at Harvest on the Harbor which takes place in Portland, Maine, on Saturday, October 22. You can find details and other local dates on her blog.

From Kathy Gunst’s Notes from a Maine Kitchen (Down East Books, 2011)

“What I like most about this syrup is that you can control the amount of sugar you use to create a natural blueberry soda or spritzer. A tablespoon or two is fabulous added to fruit salads, pie fillings, or mixed drinks (try mixing with vodka or rum and fresh mint leaves). The syrup will keep in the refrigerator in a tightly sealed jar for about a week or two, or it can be frozen (place in empty ice cube trays or plastic bags or small plastic containers) for several months.

You can also use blueberries, blackberries, or strawberries, as well, or a combination of all four.”

Find out more about Kathy Gunst or get a taste of her blog, Notes from a Maine Kitchen.