More Than Honey: Crediting a Major Player in Nutrition

Pollination relies on a strong bee population, and it is crucial to providing fruits and vegetables to consumers as well as maintaining local economies. The photo above, courtesy of Geoff Leighton, shows bees hard at work in a wild blueberry field in Down East Maine this spring.

Imagine looking down at a plate of food in a world without a bee.

For many of us, that plate would be very different, and that’s especially true for those who strive to fill theirs with healthy servings of fruits and vegetables.

Why is there such a buzz about the bee? Because we rely on honey bees to help pollinate about one-third of our food supply. That includes, to a large extent, the fruits and vegetables that provide us with our most concentrated source of nutrition.

In Maine and areas of Canada where wild blueberry harvests supply the nation, bees are held in high esteem: diets and economies depend on them. The hum we hear as we lean an ear toward a fruit-bearing field in the spring is music to the ears of farmers, and should be to consumers as well.

According to Virginia Knight, author of The Wild Blueberry Book, Maine’s wild blueberry crop has quadrupled over the past 25 years, and the bee is the reason why. The simple act of sucking nectar from the blossom and delivering it to the hive not only results in glorious honey, but provides us with food that ranges from berries grown in Maine to the almonds in California.

By renting honeybees from beekeepers every May during pollination season – usually two or more colonies per acre – growers can significantly increase their crop yields. Imported hives in the Down East area, where wild blueberries are grown, can number over 60,000, with up to 60,000 bees per hive. The more visits a bee makes to the blueberry, the more seed it contains, which in turn stimulates the size of the fruit. Most farmers strive to maximize return on their acreage by bringing honey bees to their fields, and different owners use different strategies with regard to how many times the bees are sent for pollination.

In Maine and Canada, bees pollinate the blueberries during a period of 3-4 weeks – unusually long, due to the variety of berries that blossom at different times. (You may recall that wild blueberry fields produce many different lowbush blueberry clones, which account for the unique variations in color and size.) While most commercial beekeepers are not in the honey-making business, Knight mentions beekeeper Lincoln Sennett of Swan’s Honey as an exception in her book. Sennett not only rents out bees but benefits from the honey for his own products.

Native wild bees also play an important role in pollination of blueberries, though they are less prevalent than in the past. While native populations fluctuate and are less dependable, they are used to pollinate many smaller, off-barrens fields. Native bees are exceptional pollinators and wild blueberries growers take care to preserve wild bees through conservation practices.

Above, Geoff Leighton navigates barrens in Cherryfield, Maine this spring, protected from the hives’ active bees. Land owners in the Down East area import over 60,000 hives to pollinate their wild blueberry crops.  Photo by Anita Clearfield.

Greg Bridges, blueberry farmer and owner of Bridges Wild Blueberry Company, told Wild About Health about the New Brunswick area’s “Blueberry Bee” — a solitary bee that can work in colder conditions and still pollinate. Bridges said that wild blueberry farms must compete for attention with other more plentiful crops that attract native pollinators, and while a huge crop every year is no guarantee when only the native bee pollination is used, it’s a characteristic that makes smaller barrens unique.

In recent years, the shortage of bees to pollinate crops has resulted in what growers and scientists have considered a crisis. The crisis, termed CCD, which stands for Colony Collapse Disorder, is characterized by bees abandoning their hives. The resulting shortage of bees has a economic impact as well as a dietary one.

Some local farmers have said they have not been affected by a bee shortage, while others report a significant impact. Bridges credits dedicated bee keepers who keep their colonies strong as the key to preserving the population. While some blame commercial beekeepers who work their bees from location to location, some, like Sennett, attribute the wide and varied diet of crops to stronger, healthier bees. And, while culprits ranging from cell phones to pesticides have been blamed for CCD, a recent story from the Bangor Daily News reports that a virus might be responsible.

Companies like Wyman’s who have reportedly been affected by CCD have contributed funds toward research that will hopefully uncover the cause. At the University of Maine, Frank Drummond is currently testing bees as part of research into the cause of CCD. You can read about his interesting research methods. 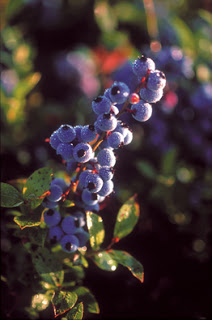 Despite concerns, this season’s wild blueberry crop seems destined for success. The National Agricultural Statistics Survey report indicates that in New England wild blueberries were assessed at good to excellent development. Good thing – the blues will be responsible for thousands of pies, hundreds of buckles, and even a few martinis, if not a dog treat or two.

You have only to look to the Maine Wild Blueberry Queen to understand the berry’s ubiquity and the necessity of the bee. (She welcomes her successor this year at the Union Fair and Blueberry Festival taking place on August 20-27.) Clearly, the responsibilities of a royal go beyond just looking good in blue – ask any queen bee.