ORAC: What is This Nutritional Buzzword?

Get the Basics in 10 Minutes (or Less)

Learning all you can about health and nutrition? You’ve likely heard the term: ORAC. It’s the nutritional measurement developed and used to evaluate the antioxidant benefit of food. Don’t be confused by the mumbo-jumbo – the ORAC score is simply another tool we can use to choose the most powerful foods for health and disease prevention.

If you’re ready to get the scoop on this latest buzzword in nutrition, take 10 – minutes, that is. That’s all you need to nail down the key points about ORAC once and for all.

A food’s antioxidant power is measured in units called ORACs, or Oxygen Radical Absorbance Capacity. The ORAC scale was developed by USDA researchers at Tufts University in order to inform the public about different foods’ antioxidant capacity.

The ORAC measurement refers to how much radical oxygen a food can absorb – that is, its effect on combating damaging free radicals.

Why do ORAC scores matter?

Why do we need to know how efficient food is in absorbing free radicals? Because free radicals wreak havoc on our cells.

Free radicals come from food and environmental sources and cause oxidation, or “rust”, in our arteries and organs. Antioxidants counteract this damage and protect against inflammation.

Free radicals are associated with cancer, heart disease and the effects of aging, and cause a multitude of diseases. They affect urinary tract health, vision health, cause diabetes complications, and kidney and liver problems.

The free radical battle in our bodies is constant waged. Antioxidants, which most commonly come from fruits and vegetables, neutralize free radicals and help maintain these many aspects of our health. In addition to helping us stay healthy, some diet gurus even claim that counting antioxidants is a better way to lose weight than to count calories!

How do I determine ORAC scores?

We’ve heard that different types of foods are “high in antioxidants”. Foods with high antioxidants often get the “superfood” moniker to indicate their powerful concentration of nutrition. The ORAC score makes measuring antioxidant capacities clearer.

ORAC measures total antioxidant capacity – termed TAC. The best way to determine ORAC scores is to know the scores of some common foods and keep that guideline in mind when you are making grocery lists or eating snacks or meals. ORAC rated foods range from 82 to nearly 14,000 in ORAC value. For example, about 23 grapes rates 739 on the ORAC scale; while about 70 blueberries comes in at 2,400.

One key to understanding ORAC scores is the comparisons. Comparisons of a cup and a teaspoon, for example, must be taken taking into account when determining what is reasonable to eat. For example, chocolate comes in at 13,120 ORAC—but that is for 100 grams of unsweetened cacao – an unrealistically high amount to be contained in a sweetened bar.

Learn more about the USDA’s ORAC measurements or get a list of ORAC Values.

In fact, it is blueberry juice that has the highest ORAC score (2,906) when juices were compared. Simply put, wild blueberries are highly concentrated sources of protective natural compounds that have antioxidant and anti-inflammatory effects, and their scores bear this out. 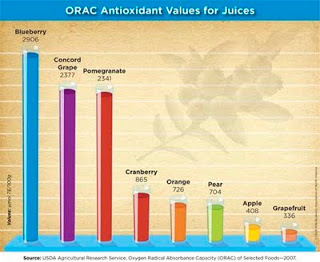 Other big winners? In the field of fruit, it’s cranberries, blackberries and prunes. In foods at large, walnuts rate high, as do artichokes, dark chocolate, and red wine.  What’s the highest ORAC score of all foods? That’s raw sumac, coming in with a 312,400 value.

Find out more about ORAC measurements for wild blueberries and why they consistently top the ORAC score list.

Got an extra minute?

Spend it increasing your plate’s ORAC score with these high antioxidant recipes.