In the quest to uncover the secrets of youth and longevity, the foremost concern is the brain. If we can extend our lives by remaining mobile and disease free, that must include diseases that wreak havoc on our ability to understand and process information from the world around us. Preserving brain function generally means preserving memory.

While it seems all we hear is bad news about poor health and growing obesity rates, the modern lifestyle, taken as a whole, has provided human beings with improved diets, more health conscious lifestyles, and improved social involvement, all crucial elements to life extension. As a result, our life expectancy has increased; many of us expect to live into our 80s and beyond. Consequently, as the population ages, issues of senility and Alzheimer’s have become epidemic. More than 5 millions people have Alzheimer’s disease today and are dealing with its devastating effects.

At the same time, there have been exciting strides in understanding the aging brain. Today, because of this understanding, we no longer feel that senility is just an inevitable part of getting older. We also know that Alzheimer’s disease targets certain segments of the population and is connected to the genes and is therefore inheritable. Also, researchers have found that regular memory loss that accompanies aging and memory loss associated with Alzheimer’s disease happen in two very distinct parts of the brain.

One of the groundbreaking discoveries in research on the aging brain has revealed that aging degrades certain types of memory while leaving others intact. Memory occurs in the temporal lobe, but within this temporal lobe, differences are clear. These differences are in the “declarative system” – which can be considered a sort of conscious, readily available memory for things like people and places – and the “nondeclarative system” – an unconscious or gained memory of sorts, such as memory for a learned motor skill or for perception and experiences.

While we might consider these both “memory” (we “remember” how to play tennis or that we have a fear of dogs, just as we “remember” what we had for breakfast or who our friends are), they are in fact not unified systems at all. Consider a patient who, because of a disease of the brain, cannot remember relatives or store any memory of meeting or seeing people that he or she has just seen early in the day. Then, consider that this patient can learn a skill over the course of several days and improve upon it. In both of these scenarios memory seems to be at work, but the two systems are not connected.

Has Rick Castle Solved the Mysteries of the Brain?

The nature of this disconnection is not known. However, we do know that this “declarative” or conscious memory system is susceptible to age, whereas the “nondeclarative” memory (or skill at tennis and our fear of dogs) is much less susceptible. We can see evidence of this in an episode of Castle this season, a prime time procedural about solving murder cases. As part of the episode’s plot, a man who may have witnessed or committed a murder had lost his memory. He had no recollection of who he was, where he lived, or who he was married to. In an effort to determine his identity, the quick-thinking detective asked the man to sign something. With pen and paper in front of him, he signed effortlessly, and his name was discovered.

The sly Rick Castle realized that although the man could not recall his name (declarative memory) he would still be able to sign his name (nondeclarative memory) because it was something he had repeated so often, it had become second nature – the act of moving the pen was a motor skill, like driving, not a conscious recollection of what he was writing. While access to one type memory had been blocked, the other was wide open. 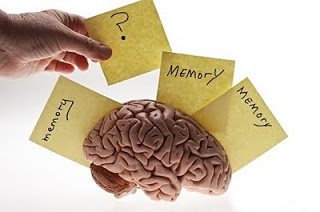 While a prime time murder series shouldn’t be considered a reliable source for science, the scene seemed to have a handle on the idea that different types of memory occur in different systems, and while one can be eroded or wiped clean, the other can remain intact. Finding out what portion of the temporal lobe is in charge of the declarative and nondeclarative systems can play an important role in isolating the disease discovered by Dr. Alzheimer back in 1906.

Isolating Alzheimer’s disease is one step toward the achieving the ideal: anti-aging. If we can preserve brain function, along with body function, we can delay the aging process. Unfortunately, we cannot currently modify our genes or treat Alzheimer’s disease or the memory loss that comes with the aging brain. We can only take precautions by understanding its risk factors. Researchers have discovered that one of the risk factors appears to be how the body handles glucose. Studies of the genetic code of those with Alzheimer’s disease appear to suggest it is connected to cholesterol metabolism.

One of the normal processes in our body is that it releases insulin from the pancreas and allows the muscles to metabolize it. But as we age, we all become a bit insulin resistant. For some, this can lead to type-2 diabetes, an age-related disease. For others, it may not lead to a diagnosis of diabetes, but it can still pose challenges to the aging body.

Knowing that increases in insulin are risk factors provides important knowledge in the prevention of this disease. For example, lately there has been much interest in eating foods with a low glycemic index as part of a healthy diet. Understanding the glycemic values of food makes healthy meal planning easier especially for people with diabetes. A food’s glycemic load measures both the type and quantity of carbohydrate consumed, telling us how rapidly a particular carbohydrate turns into sugar and how much of that carbohydrate a particular food contains. (While research is currently underway to evaluate these claims, GI foods may also have an effect on weight loss and appetite control.)

When we talk about “brain food” we are talking about food that is good for our brain because of how efficiently our body can process its glucose. Foods with a low glycemic load keep our glucose levels steady and can keep us clear headed – perhaps not just in the short term but in the long term. So, when it comes to preventing diseases of the aging brain, one thing we can do is watch our glucose intake and take measures to prevent diabetes.

What else can we do to prevent aging in the brain?

1) We can exercise – our bodies and our minds. That the healthy brain is associated with a healthy body is not just lip service. Moreover, high brain function is related to social engagement and intellectual activity. Cognitive involvement, especially social involvement, is a major factor in preserving brain function.

2) We can hope for a cure. First stage Alzheimer’s disease is known to affect the synapses of the brain, not the cell itself. This means that if caught and treated early, because cell death is not occurring, chances are good that the brain could repair itself. At the same time, finding the gene responsible for Alzheimer’s does not automatically mean there will be a cure. (Consider the search for the right drug to treat Huntington’s disease: while the gene can be isolated and families can be tested, finding out you have the gene only means you can prepare, not be cured.) It is, however, a first step.

3) We can embrace the benefits of the aging brain. While age-related memory loss and Alzheimer’s can occur, there are other benefits to growing old with the brain you have. The aging brain retains wisdom and perspective. Anxiety generally decreases in the aging brain. And, while details may be lost, the big picture is not: the aging brain appears to retain is ability to grasps the “gist” of things – a benefit that is both advantageous and valued.

Interested in more information on Alzheimer’s Disease? The Alzheimer’s Project is a series of films produced by HBO which provide an in-depth look into the scientific advances being made in research and medical understanding of this disease.

Participate in Alzheimer’s Research. Scientists are making great strides in identifying potential new interventions to diagnose, slow, prevent, treat, and someday cure Alzheimer’s disease. Currently, more than 90 drugs are in clinical trials for AD, and more are in the pipeline awaiting Food and Drug Administration (FDA) approval to enter human testing. Find out about how to be part of a trial or study at the National Institute of Aging.

Educate Yourself & Find Support. The Alzheimer’ Association can help you to understand the warning signs of aging and provide you with avenues for support when it comes to living with this disease.

The Charlie Rose Brain Series was used as a source for some of the information in the above post.