When a delicious comfort food comes together with an ingredient that is a powerhouse of nutrition and disease prevention, well, it’s food nirvana.

Chef Jeff Buerhaus from (Maine’s own) Walter’s in Portland points to Blueberry Cobbler as one of those foods that are in the heavenly pocket. He joined radio host and culinary maven Chef Jamie Gwen recently on her radio show “Food & Wine with Chef Jamie Gwen”

and disclosed that it was his all-time favorite comfort food. He makes it with dried Maine wild blueberries that are rehydrated to bring them back to their original taste, texture and nutrition (though frozen can be used, too). Buerhaus’ love for blueberries doesn’t stop there: he also puts Duck Breast with Blueberry Demiglaze on his list of favorites that feature the region’s most nutritiously delicious fruit.

Buerhaus also shares dishes that fit in perfectly at game time when the importance of noshing rivals that of touchdowns – it’s football season, after all, and if there is no jalapeño in your food then you just aren’t a sports fan. He has a uniquely tasty take on Asian-influenced foods, and he talks about how to bring that flair into half-time by making recipes such as Tuna Tataki Nachos ad Cracklin’ Calamari.

A Taste of Maine

Cheers to Chef Buerhaus for always making good use of blueberries at Walter’s, a destination if you find yourself in Portland Maine. He and an all-star lineup of chefs will be at Harvest on the Harbor in the city this weekend as well. Harvest on the Harbor is a food and wine festival that features three days of food samples, chef demos, culinary wonders and wine tastings. Many foodies will be extolling wild blueberries’ many virtues including their versatility – how could they not? – but to be honest, it will be their taste that is mostly on display and this flavor-focused culinary event.

You can hear Chef Jamie Gwen’s California-based radio show online where she shares recipes and culinary wisdom. She brings restaurant news, wine 101 and interviews with the country’s leading chefs, cookbook authors and restaurateurs to her listeners with a signature gregariousness. And, her food and wine website is a fun resource for recipes and tips. 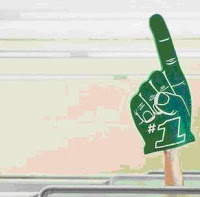 They also offer a showcase of palate-pleasing blueberry-centered dishes including dessert recipes and a slew of snacks and sides that will serve discerning sports fans during pigskin season.