A recent study into the effects of an extract found in blueberries provided good news this month about a certain type of cancer. The research showed promise in the treatment of bladder cancer, demonstrating the compound’s anti-cancer activity in the cells.

Previous research into this powerful fruit has already demonstrated potential in cancer treatment and prevention. Research has shown that blueberries inhibited the growth of Triple Negative Breast Cancer, a particularly aggressive and hard to treat form of breast tumor, and other research shows compounds in wild blueberries may be effective inhibitors of both the initiation and promotion stages of cancer. This latest research was conducted by a professor from National Cheng Kung University in southern Taiwan, and it indicated that a substance extracted from blueberries can induce the death of bladder cancer cells and may be effective for chemotherapy-resistant bladder cancer.

What’s also interesting about this study is the extract Professor Wang Ying-jan used: it’s pterostilbene. The word may sound familiar – it’s a compound found most commonly in blueberries, and it’s becoming more and more important in the world of nutrition research.  Its unique health benefits once again show the blueberry – particularly the wild blueberries with its potency of concentrated compounds – has more secrets under its deep blue skin.

Pterostilbene is an antioxidant found specifically in blueberries and red-skinned grapes. It is similar to resveratrol, the popular compound present in wine and known for its anti-aging properties, but it’s not as well known – yet. (And, despite its presence in grapes, it isn’t found in wine.) It’s one of many “stilbenes” a type of organic compound that is makes up food’s chemistry.

According to Professor Wang who conducted the bladder cancer study, pterostilbene also has antioxidant and antiseptic features that exhibit anticancer activity, and it has the potential to lower blood fat levels. We already know the powerful effect antioxidants have on the body. They help our bodies protect against disease and age-related health risks by decreasing inflammation and fighting free radicals that cause diseases of aging.  Research is in the beginning stages for this exciting new antioxidant compound but it is thought to have a preventative effect on cancer and cognitive decline, effectively slowing cellular aging. It also shows promise for type 2 diabetes by slowing sugar surges and regulating the secretion of insulin. (You can find this study in the Journal of Agricultural and Food Chemistry.) And, early studies indicate a benefit in preventing high cholesterol and heart disease.

The best news about this compound is its accessible delivery system. Pterostilbene is most commonly known for its presence in blueberries, in particular the more potent wild blueberry, and also in grapes and peanuts.  It is marketed as a supplement; however, the most dependable way to get the benefits of nutritional compounds remains to eat it in its natural form in food. 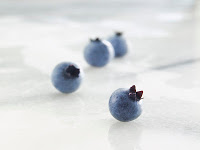 If you are intrigued by the unique benefits of pterostilbene, your best approach is to increase your intake of wild blueberries: they are a leader in antioxidants, and the smaller berry with its high skin-to-pulp ratio (where the antioxidants are found) has the highest antioxidant capacity compared to 20 of the most common fruits. At least ½ cup every day provides an exciting, delicious way to boost your health in a promising variety of important ways.