You Can Trust Allison Fishman

The “Skinny” Cook Finds the Recipe for Healthy, Shameless Eating

The author of You Can Trust a Skinny Cook talked exclusively to Wild About Health about the myth of the microwave, how to maximize servings, and why wild blueberries make her happy.

Allison Fishman admits she kind of loves the fruit and vegetable serving requirements. When she’s away from home working, she leaves those picking up fast food sandwiches to their own devices, and insists on yogurt and berries instead. Recently, while working on a shoot at the Cooking Light offices where she is a contributor, Fishman was delighted to discover the cafeteria stocked with yogurt parfaits with a layer of blueberries. “It’s kind of fun on the road when you can get those things,” she says. “If my goal is to have those six to nine servings, then OK, bacon, you’re going to have to wait.”

You have to trust someone who has that sort of commitment. And about the rest of the servings? No problem. One of her recent on-the-road meals at a Alabama steakhouse started with a celery and carrot appetizer with dressing (one to two servings) followed by a salad (another serving or two), roasted cauliflower (serving), and creamed spinach (serving). Then, she ate half of her steak. “That’s the way to eat,” she says.

“After a lifetime of trying to diet, suddenly there it was. There was the solution.”

Fishman knows how to eat – even at a steakhouse on the road – from experience. She may be the author of You Can Trust a Skinny Cook, but she doesn’t consider herself skinny. “I’m not a naturally skinny person. I don’t come from skinny people. I’m 5’6″, 135 pounds. I’m curvy, and that’s they way it’s going to be,” she says. But she has been bigger. After working a corporate job for ten years, she had been eating out and traveling a lot, and she had gained a lot of weight.

“I was going out to Boston and Manhattan and having wonderful meals and then cooking at home and having bad food. I was microwaving frozen diet dinners or having diet snacks. And I was getting heavier,” Fishman says. “It was this weird, sort of sad space I was in.” When she finally tired of the corporate world, she did something surprising. She went to culinary school – not because she aspired to be a professional chef, but because she wanted to learn how to cook.

“I thought, I can’t be the only woman suffering in the kitchen,” she said of her culinary ineptitude. “There’s an assumption that women are domestic and have these kitchen skills, and quite frankly, they are not things you are born with.” At culinary school, she cooked and ate more than she had in her life, and she shrank. “I remember my sister-in-law saying, ‘We need to go to Nordstrom’s. Your clothes don’t fit’. I realized that I was suddenly learning good cooking techniques, I was cooking vegetables and grains for the first time, and making taste and flavor the priority. Through doing that, I was naturally making better food that was better for me.”

It was a message that resonated. Fishman went on to co-author the bestselling book Cook Yourself Thin, and to serve as the co-host of Lifetime’s Cook Yourself Thin and TLC’s Home Made Simple. You Can Trust a Skinny Cook is her latest book, and it includes recipes and cooking techniques for home cooks who want to eat well and maybe get a little skinnier in the process. Recipes accompany nutritional information as well as a complement of tips for taking in fewer calories without giving up flavor, taste, and satisfaction.

“We are defrosting, we are reheating…we are in a culture of 20 minute meals.”

One of Fishman’s goals is to debunk the notion that eating can be effortless. She says that we tend to buy into a myth that might have been born with the microwave: that if we’re spending time doing something, there must be something wrong with us. “Cooking has gone from something that we have to do to take care of ourselves to something that’s optional,” she says. She likens it to any daily activity like snow shoveling to get the car out in the winter, or showering. “When people brag about not cooking, I think, do people brag about not showering? ‘I don’t shower, showering takes so much time…what a pain!’ But it’s a part of taking care of yourself. And cooking to me is one of those things.”

At the same time, her recipes are by no means difficult. They were tested by novice cooks and chosen based on their ease, as well their very high standards of flavor and quotient of fun. She includes a gazpacho that takes 10 minutes, for example, and an nearly effortless a Creamy Cucumber Soup. But if making a meal takes more than 20 minutes, Fishman says that’s not a bad thing: “I’d rather spend one hour three nights a week and have delicious leftovers.”

It’s no surprise that Fishman included recipes that feature a lot of fruits and vegetables. While she doesn’t care for fruit and veggie “sneaking”, she uses them to both enhance and enlarge servings. “I put them in so you know about it, and you enjoy it,” she emphasizes. She acknowledges that Americans are used to chewing (“and chewing, and chewing”) and her recipes warrant plenty. In fact, many of the inclusions in You Can Trust a Skinny Cook are favorites in lower calorie versions. But calories aren’t diminished through low-cal methods and fake-food substitutions. They disappear through cutting portions – a flourless chocolate cake that could extravagantly serve eight, actually generously serves 12 – or through Fishman’s version of portion “stretching” that actually adds to the flavor.

One tasty example is Fishman’s Spicy Peanut Noodle recipe which incorporates eight cups of Napa cabbage in addition to the noodles. Rather than a skimpy cup of peanut noodles, families can linger over two-cup servings instead, savoring the spicy sauce along with generous amounts of red pepper, jicama, and cabbage. In a recent cooking demo for Wild Blueberry and Peach Bread Pudding, the resulting servings simply heaped with fruit. The only ingredient that could be considered a lower calorie replacement was from a more caloric bread such as a brioche to an Italian bread. She explains, “I’m cutting out the calories that you don’t taste anyway.”

“I want to have the whole fruit – the whole berry.”

“It makes me smile to have them,” Fishman says of using berries as an ingredient in her cooking. “I know I’m doing something good for myself.” Flavor is always the priority for her, and berries are put to delicious work in this regard. Wild blueberries serve a calorie-saving purpose that only enlivens flavor. Her Blueberry Banana Bread uses frozen blueberries as a replacement for chocolate chips, for instance – a decision that turned 600 calories (in a cup of chips) into 60. And when the result is Blueberry Banana Bread, well, that’s a pretty painless sacrifice.

Fishman is also a persuasive proponent of keeping the pantry full – she has to be. She also works as a personal coach helping clients achieve healthier ways of eating. (For Cooking Light she works with a different reader every month to help them adopt a new healthy habit.) They must eat well and eat heartily, so they need easy access to good food. 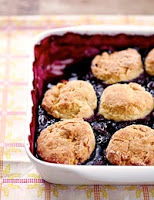 She considers a stocked freezer a crucial part of a stocked kitchen. She effuses about frozen peas, frozen corn, and frozen wild blueberries. “Your freezer should be full of frozen fruit and frozen vegetables so that when you go to make a meal they are right there,” she says. She avoids “drinking” her calories in health drinks and juices, opting instead for the whole fruit, saying, “I want to have the skin, and I want to have the fiber.”

Having frozen is her ideal method, because, she says, “it’s they best way to get the whole berry.” She also likes the cost savings of frozen, and uses frozen wild blueberries in all of her recipes that call for blueberries, with the rare exception of those used to garnish lemon tarts, where she opts for fresh.

While wild blues have a strong showing in Fishman’s book, it also features fabulously tasty dishes from soup to dessert, including 352 calorie Salmon with Dill Sauce, and a 221 calorie New England Clam Chowder. There’s no stronger evidence that this is a delicious marriage of love for health and love for food. Ready to find your own inner skinny?

Check out Allison Fishman’s You Can Trust A Skinny Cook.