< Back to Blog
Health & NutritionResearch

There aren’t a lot of people who believe in the power of healthy living as much as Daniel Nadeau, M.D. One reason? He’s seen it. As a clinician, in his work with patients, as Medical Director of the Diabetes and Endocrinology Associates of Maine’s York Hospital, and as an expert on the subject of diabetes, Nadeau has witnessed how simple choices can change – and save – a person’s life.

Nadeau often shares his expertise about the rise in lifestyle-related diabetes in local and national media. Here in Maine, he said, 3% of Maine population may have diabetes and not know it. “There are so many people that are heavy and getting a heavier. It’s a major problem,” he told Wild About Health. “If someone is obese, their risk of developing diabetes is twenty- to fortyfold higher.” For many of his patients, their diagnosis is a wake-up call.

Recently he saw a patient – a man in his mid-30s – who had developed Type 2 diabetes that was out of control. The man lived a sedentary life in a sedentary job, and he made all the wrong food choices, eating a daily diet of burgers and fries – in other words, standard American fare. He was facing grave consequences if he didn’t change.

Talking to Nadeau got the message across. His patient started eating healthy and exercising. He dropped 35 pounds, and his blood sugars returned to normal. “He has a new lease on life,” said Nadeau. “When you make real change, you make real differences.”

Quieting the Storm Within

As a kid growing up in Fort Kent, Maine, Nadeau ate a typical diet heavy on meat and dairy. But it wasn’t long before he developed an atypical interest in health and wellness. In high school, he opened “Nadeau’s Natural Food”, a health food store that he ran all through college. He read all the books he sold, and his thinking about food began to change. “One week I read Adelle Davis, the next week I read Sugar Blues, the next week I read Macrobiotics, another week I read Ann Wigmore and about the Raw Foodists. Every week I had a different diet.” The more he read, the more his diet shifted. Even today, his approach to food is drawn from what he learned back then.

One of the missing elements of his food education was the story of color. Until he wrote The Color Code: A Revolutionary Eating Plan to Optimum Health with James Joseph in 2002, the powerful role of incorporating color into the diet was not on even the most informed consumer’s radar. The Color Code directly influenced efforts such as the 5-A-Day program, which encouraged people to get five servings of fruits and vegetables (that recommendation has now changed to 8-10 servings) and helped consumers understand the important nutritive benefits of pigmented foods.

That brings us back to the issues of diabetes. Type 2 diabetes is the most common form of diabetes in America today. People with diabetes have more Alzheimer’s, more cancer, more vascular disease, increased inflammation, and accelerated aging that leads to complications of the kidneys, nerves, eyes and many other parts of our bodies. People with diabetes have a threefold increased risk of having a heart attack as well – the same risk as someone who has already had a heart attack.

Much of one’s risk of Type 2 diabetes depends on their being overweight. When we’re overweight, our body releases more free fatty acids and our insulin doesn’t work as effectively. Not only are we capable of changing this, said Nadeau, but we can change it on day-to-day basis based on the choices we make about food and exercise. People with diabetes are contending with a body that is full of inflammation, and by making different food choices, they can begin, he said, to “quiet the storm within.”

While he doesn’t evangelize, Nadeau believes veganism can be one way to quiet that storm. As a vegan, Nadeau said his diet is naturally more diverse. “As opposed to having a hamburger and fries one night and macaroni and cheese the next, you are tending to pull in all these different brightly colored fruits and vegetables. You tend to cook different things and you tend to explore more,” he said. He favors veganism for those facing dire health circumstances due to diabetes not just because the diet is healthy, but because it presents a new way to approach food to people struggling with change. A vegan diet enables them to truly rethink what they eat at a time in their life when change is critical.

“People don’t realize in terms of preventing and treating the chronic diseases we face that the benefit really comes from plants,” said Nadeau. While veganism eliminates dairy and red meat, two things he recommends avoiding, reliance on plants is its most important characteristic. Even just a move toward incorporating more plant foods is a good start, he said. For some, that may mean making vegan choices a few days a week, or trying to eat vegan two out of three meals a day. 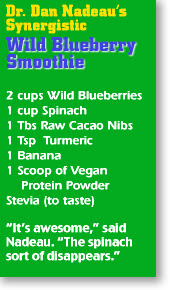 Adopting a healthy diet in the face of fast food conglomerates and limited options for vegans when it comes to eating out is definitely challenging. “But veganism is something that still has some cachet,”  Nadeau said. “I don’t believe it has reached its peak in terms of interest.” He blames the Atkins craze for setting the world of healthful eating back dramatically and considers the country to be in “recovery mode” from the phenomenon. Whether it is because of health, the animal world, or climate change, he believes it is a time of increased awareness of the consequences of our food choices and that more and more people are beginning to eat with consciousness.

Toward a Healthier Meal

“I ask people to take each meal at a time and look at what they are going to eat,” said Nadeau. “Ask yourself, is this the healthiest way I can eat this meal?” His dietary convictions weave through the books he currently has in development. One focuses on diabetes, another on raising healthy kids, and another on healthy living and weight loss. One secret weapon he gives patients is the wild blueberry smoothie. “Most people like berries, and they don’t have a hard time incorporating a smoothie for breakfast. They end up loving it, and they find it doesn’t spike their blood sugars. It’s a great way to start the day.” (His own smoothie recipe, shown in the sidebar, doesn’t skimp – it contains a full 2 cups of wild blueberries.) Wild blueberry smoothies also provide excellent synergy. By combining different antioxidant foods, he says, it creates a synergistic relationship that makes the foods even more powerful than they would be if they were eaten alone: “Combining berries with something green, with raw cocoa and with turmeric, another amazing antioxidant, you are protecting yourself before you walk out the door.”

Hear Dr. Nadeau on the Power of Blue:

For those who eat meat, he advises eating more fish, turkey and chicken, and avoiding sugar, white flour, beef, cheese and ice cream, while focusing on whole grains and legumes in addition to fruits and veggies. He also recommends eating more raw foods. “Blueberries are gong to be better for you if you have them raw or frozen, as in a blueberry smoothie, than they are if they are cooked,” he said. His ideal way to eat food is to allow the cells to release glutens through brief exposure to heat for maximum nutritional absorption – for example, spinach that instead of being cooked merely “kisses” a hot grill.

While forgoing comfort foods is simply out of the question for some, when people begin to connect with the idea of healthy eating, Nadeau witnesses remarkable transformations in terms of their body weight, blood sugar control, and how they feel, just like his 30-year old patient. Are the rest of us embracing this important connection between our choices and our health? “People need to hear from somebody,” he said. “They realize the connection when they get done talking to me.”


Find recipes such as Blueberry-Pineapple Parfait from The Color Code at wildblueberries.com.