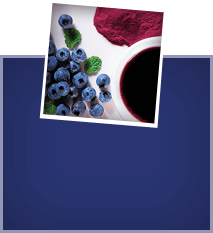 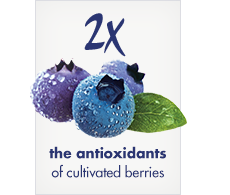 The wide range of natural antioxidants found in fruits and vegetables helps our bodies protect against disease and age-related health risks. Wild Blueberries are especially rich in anthocyanin, a flavonoid with potent antioxidant capacity. Highly concentrated in the deep-blue pigments of Wild Blueberries, anthocyanin is responsible for both color and powerful health protection potential. 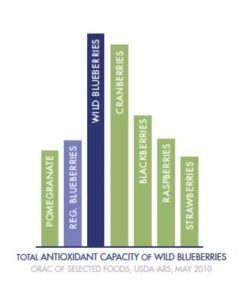 In fact, Wild Blueberries have 2x the antioxidant power of ordinary blueberries, offering more of what it takes to combat disease and promote healthy aging. 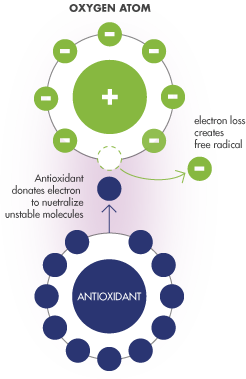 Antioxidants are a hot topic today because they help our bodies protect against age-related health risks. Every day, our cells wage a battle against free radicals – unstable oxygen molecules that are a normal byproduct of metabolism. When you aren’t getting enough antioxidants in your diet, free radicals can build up in your body, causing oxidative stress, which is associated with cancer, heart disease, diabetes and other diseases of aging.

The Anti-Aging Power of Blue

Dietary antioxidants such as anthocyanins, flavonoids found in the blue pigments of Wild Blueberries, have the ability to neutralize free radicals and help prevent cell damage. Antioxidants also protect against inflammation, thought to be a leading factor in brain aging, Alzheimer’s disease and other degenerative diseases. 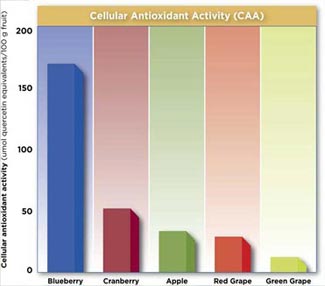 A recent advancement in the measurement of antioxidant activity in foods is the cellular antioxidant activity (CAA) assay, developed by the Cornell University Department of Food Science. The CAA assay provides information on the uptake, metabolism, distribution and activity of antioxidant compounds in cells. Lead researcher Rui Hai Liu, Ph.D., used the CAA assay to determine that Wild Blueberries performed better in cells than cranberries, apples and both red and green grapes. 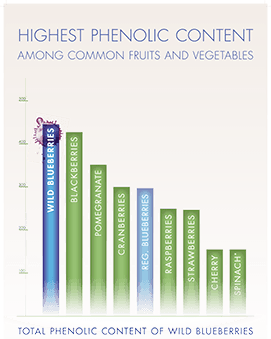 Journal of Food Science – Dietary Bioactive Compounds and Their Health Implications Rui Hai Liu Vol 78,51, 2013 (Total Phenolic Content Chart adapted from Yeung and others 2003; Wolfe and others 2008; Song and others 2010)
* Spinach had the highest total phenolic content of the 27 common vegetables tested.

In a 2013 study published by Rui Hai Liu titled Dietary Bioactive Compounds and Their Health Implications, we are presented with another measure of bioactivity in the form of total phenolic content in common fruits and vegetables. Among the 25 fruits and 27 vegetables most commonly consumed in the United States, Wild Blueberries have the highest total phenolic content per serving. Phenolics are phytochemical compounds in plants that protect them from the insults of nature while assisting with essential functions of reproduction and healthy growth. They contribute to the color of the produce and possess antioxidant and anti-inflammatory properties that when consumed are believed to provide us with potential health benefits associated with reduced risk of many chronic diseases. Phenolics are perhaps the most studied class of phytochemical compounds and more and more evidence is constantly emerging that suggests the health benefits of fruits and vegetables are attributed to the additive and synergistic interactions of these bioactive compounds.